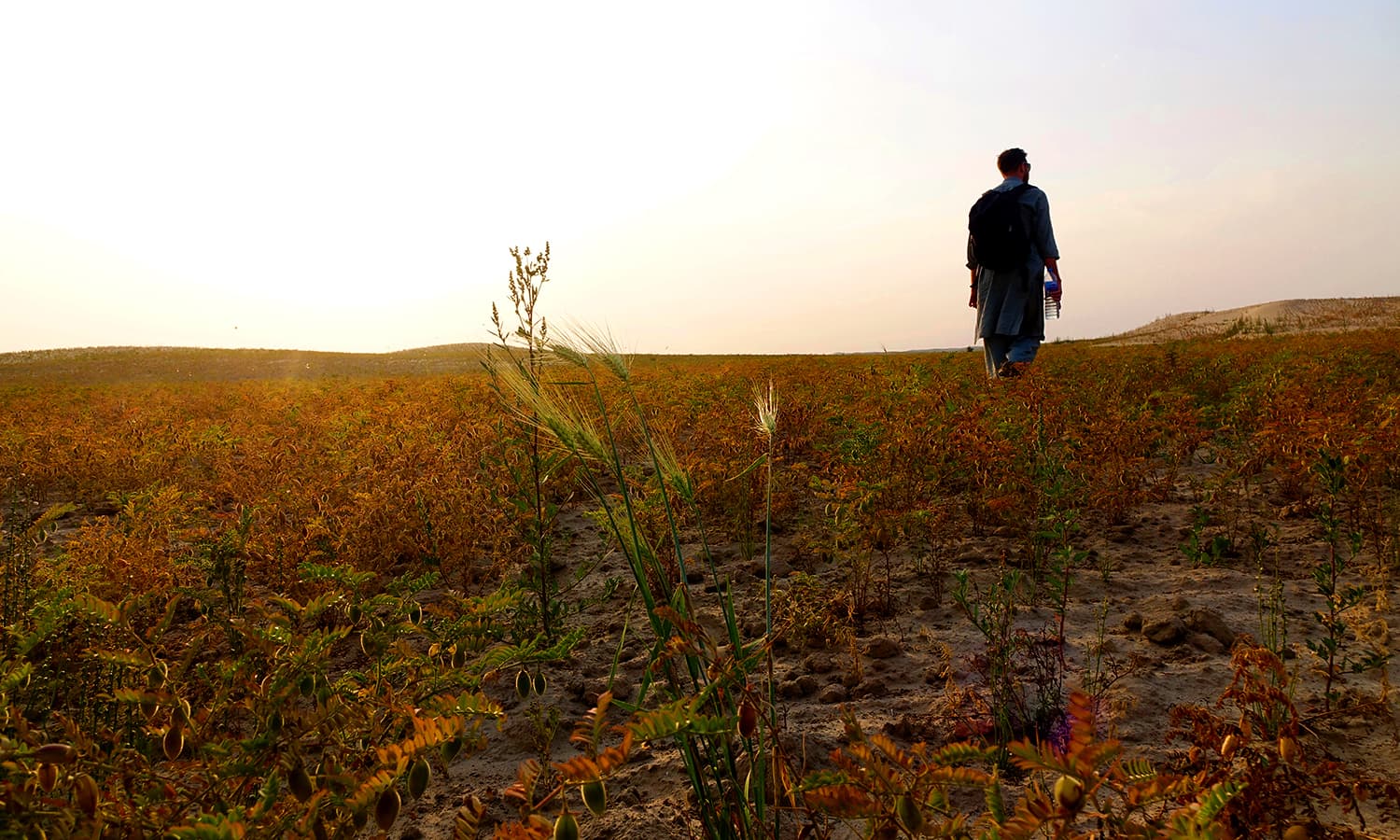 I’ve always been fascinated by the desert. The idea of a giant land of distant horizons, framed by a flawless canopy of blue sky, and complete silence.

In my mind, being in a desert is like existing in a vacuum — no beginning, no end, and nothing around but space.

Few people appreciate the sheer beauty of a desert — far from the barren wastelands that we imagine them to be, they are dramatic, almost spiritual places, filled with life.

Being from Australia, I had experienced deserts long before visiting Pakistan. My native country, an entire continent, is filled with deserts which in some cases stretch thousands of kilometres to the seashore.

I’ve flown over them countless times, and even driven through them. But I had never stayed any length of time in a desert — until now.

It was a few weeks ago that I received an invitation to stay on a friend’s relative’s farm in Hyderabad Thal, the desert west of Jhang in western Punjab.

My friend Ali and I left Lahore in the middle of the night, and arrived at the desert just after the ringing of the Fajr call to prayer — a perfect time to witness the sunrise.

A giant tangerine sphere rose in the distance, bathing the surroundings in an atomic crimson hue — an otherworldly spectacle which seemed to greet us to the place which would be our home for the next few days.

Far from being desolate, the desert in Hyderabad Thal is lush green in February and March — this land is used for the cultivation of green chickpeas (hara choliyan), and the squat plants’ elastic branches and chubby little fruits jiggle in the desert breeze as far as the eye can see.

The sea of green is interrupted only by the odd sand dune, where the faded yellow sand occasionally rises up in undulating waves, reminding us of what lies beneath.

When the harvest is picked, the roots die off and the desert returns to its usual naked emptiness.

However the desert is far from dead; as we walked from the drop-off point towards the farmhouse, we spotted tracks in the sand; tiny scoop shapes that stood as evidence to the existence of insects and birds in the vicinity.

My friend, a local, and I tried to imagine what could have produced the footprints; a sparrow, a small lizard, a scorpion, perhaps?

What was clear was that while the animals that made it were long gone, the desert around us was teeming with life.

The days we spent at the dera were long, dry, sweet and mesmeric. In March, the heat hadn’t yet built, and respite from the sun’s rays could be found under the boughs of a grand old banyan tree.

We spent hours lolling about on charpoys, eating ber picked straight off a tree across the yard.

Lying on the string beds with only the sun’s position to indicate time, I felt that my life itself was slowing down.

With no cellphone signal, no internet, little electricity to speak of, and no form of entertainment besides our own creative minds, I detected a gentle yet pleasant decalibrating of my sense of time.

With the sun’s migration from one side of the sky to the other, we moved the charpoys to follow the shade. 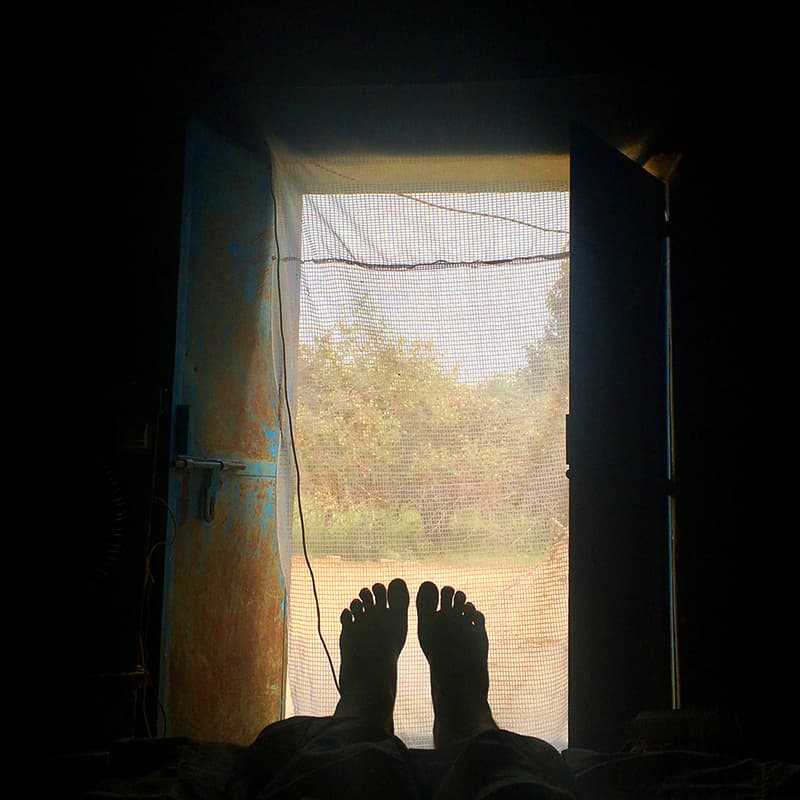 At one point, we ended up at a roll of sand next to a row of chickpea plants. A few small birds darted about in the greenery just metres away, diving and swooping at breakneck speed.

The slightest movement by either of us would send them shooting off in a different direction, only to flitter back moments later.

Laying on my stomach, I dragged myself lazily to the edge of the charpoy and stretched my chin over the edge. I was now looking straight down at the powdery, sandy earth, and was amazed by what I saw.

Scores of insects were marching beneath the charpoy into the field of crops, each leaving behind their distinctive footprints.

Ants, both tiny and large, something which resembled a crab in its sideways gait, tiny spiders… they were all on the move to the shady green microforest, possibly in the hope of finding cover from the birds above.

The other thing that strikes you about the desert is the sense of sheer quiet. Nowhere is the phrase ‘deafening silence’ more apt.

So expansive is the sky, so distant the edge of the earth, so clear the visage, and so subtly alive the surroundings that it’s almost overwhelming.

In such a situation one is forced to appreciate the humbling truth of how small one truly is in the grand scheme of things; for the thoughtful, it could inspire them to inner dialogue; for the uninitiated it could be simply terrifying.

To get some groceries for dinner, we would ride a motorbike 10 kilometres to the nearest town. The trail through the desert was lonely — the whole time we didn’t pass another soul, bar the odd snake which slithered across the path, or guard dog from a nearby farm which would bark at us until we were out of sight. 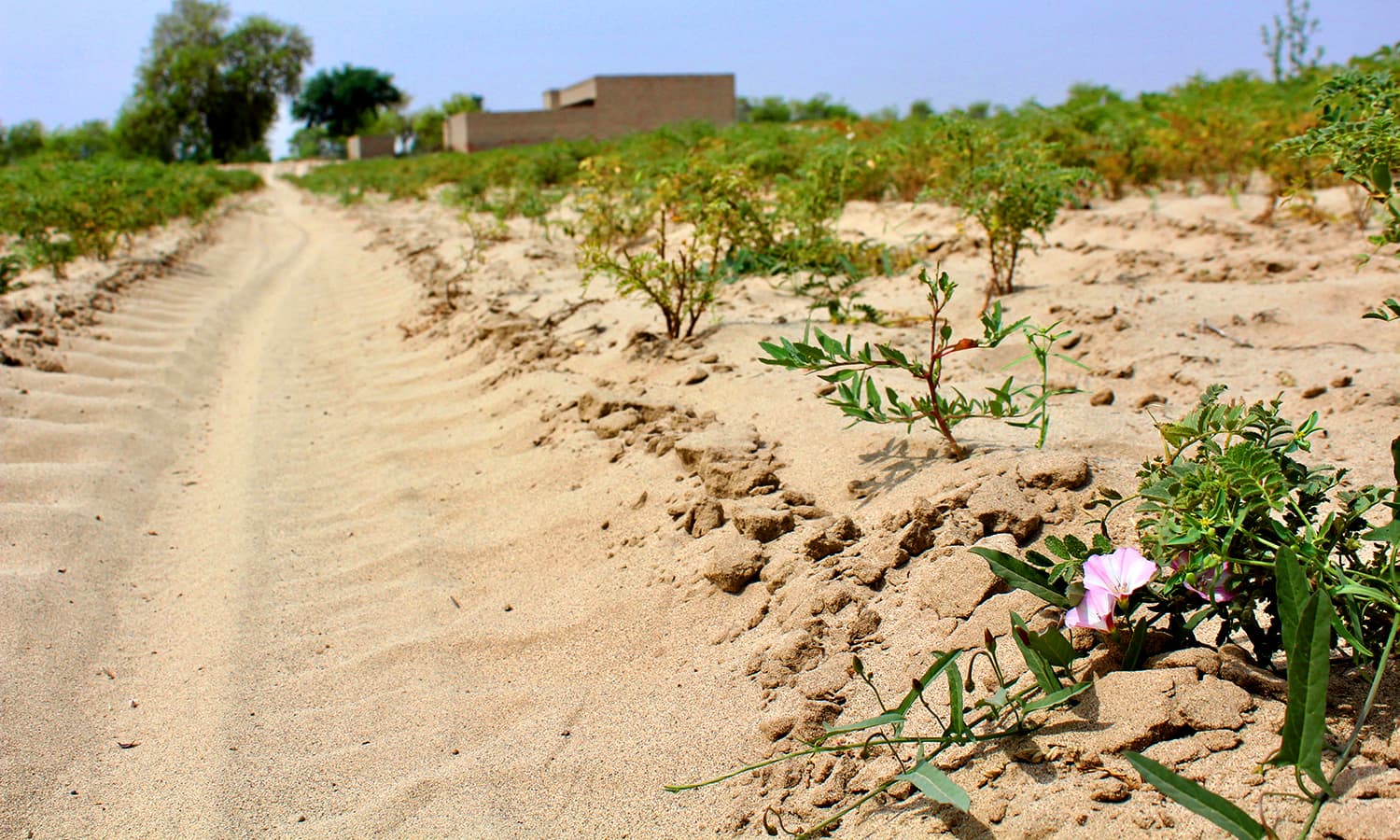 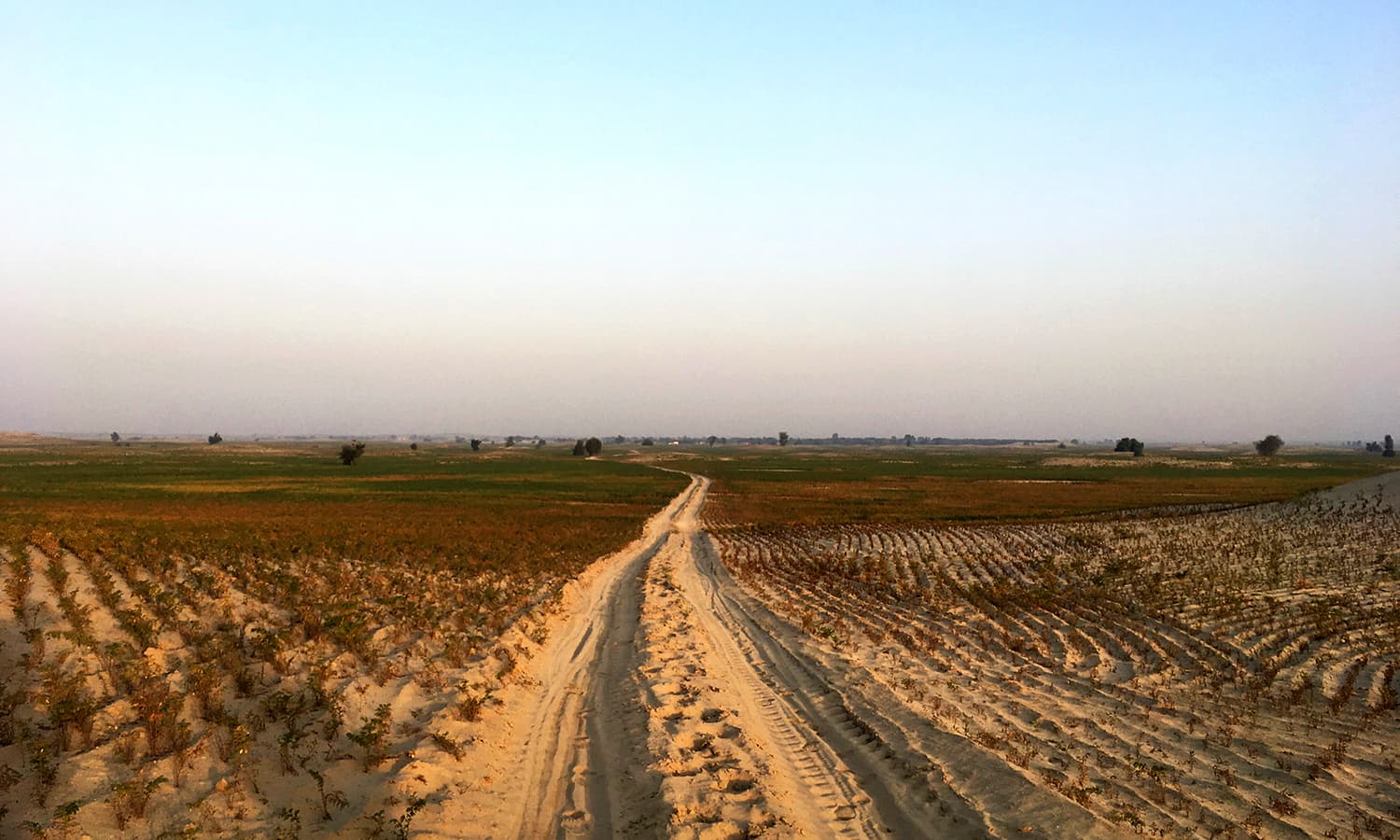 Somewhere out there, in the middle of nowhere, we saw what looked like a mud brick building in the sand hills. Ali rode towards it to investigate; upon closer inspection it was a tiny mosque.

“Why would they build a mosque out here?” I asked.

“For travellers. People travelling on foot,” he replied.

In all my hours indulgently lost on the charpoy, wondering dreamily about the enormity of it all, I had forgotten that, in fact, humans had, for millennia, conquered the desert by foot.

Once again, but in a very different sense, I was struck by how small I was in this land of might and extreme. I kicked off my Peshawari chappals and sank my feet into the soft, soft sand.

Beneath, the surface was cold, a sea of cool earth that hadn’t seen the heat of the day. The tiny grains trickled in between my toes, sensually massaging the soles of my feet, and I lay back in the field, staring at the milky blue sky.

The sun was getting low in the sky, and I was partially shielded from its rays by a sand dune. An ethereal glow enveloped the remains of the day. 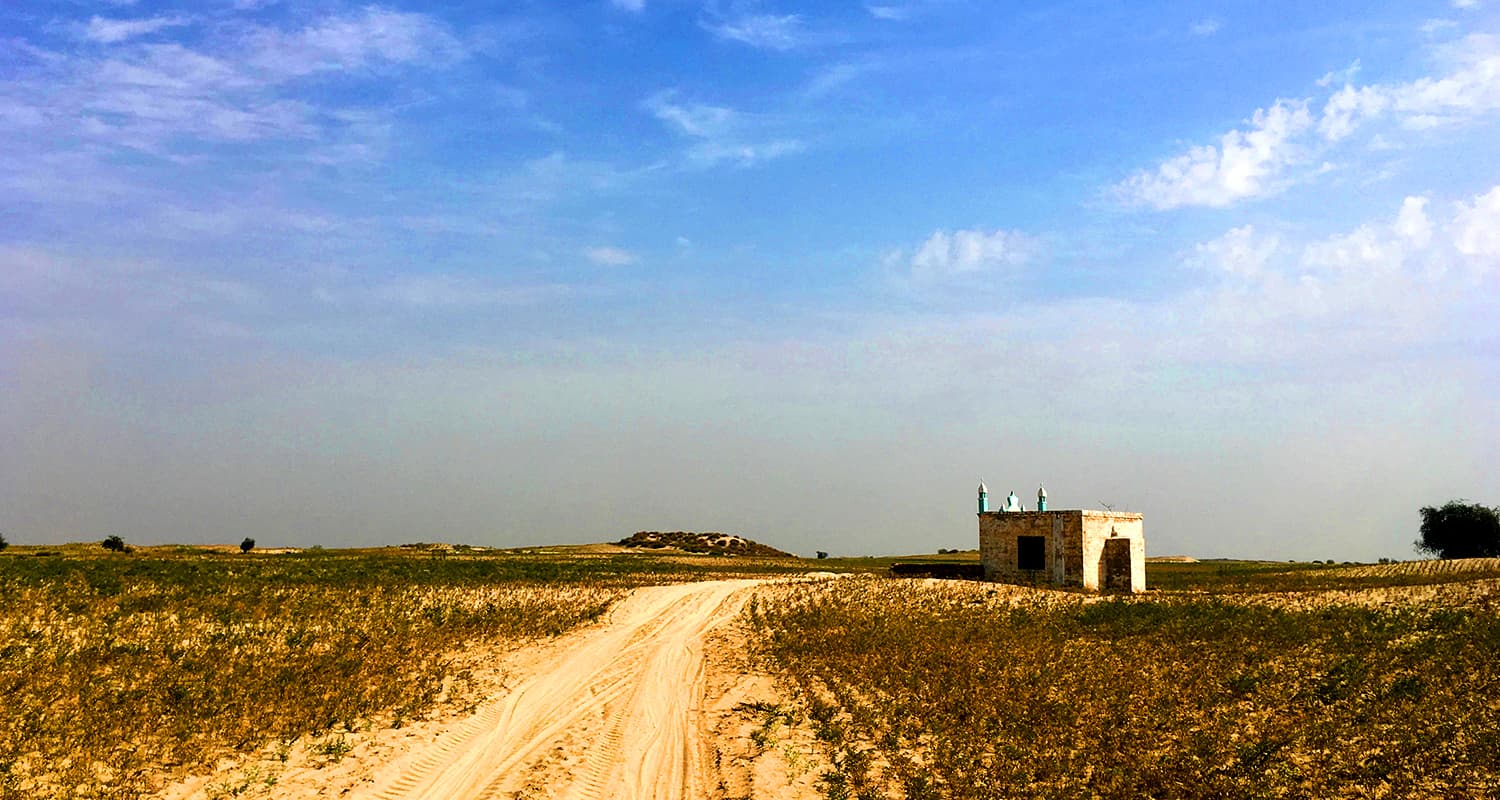 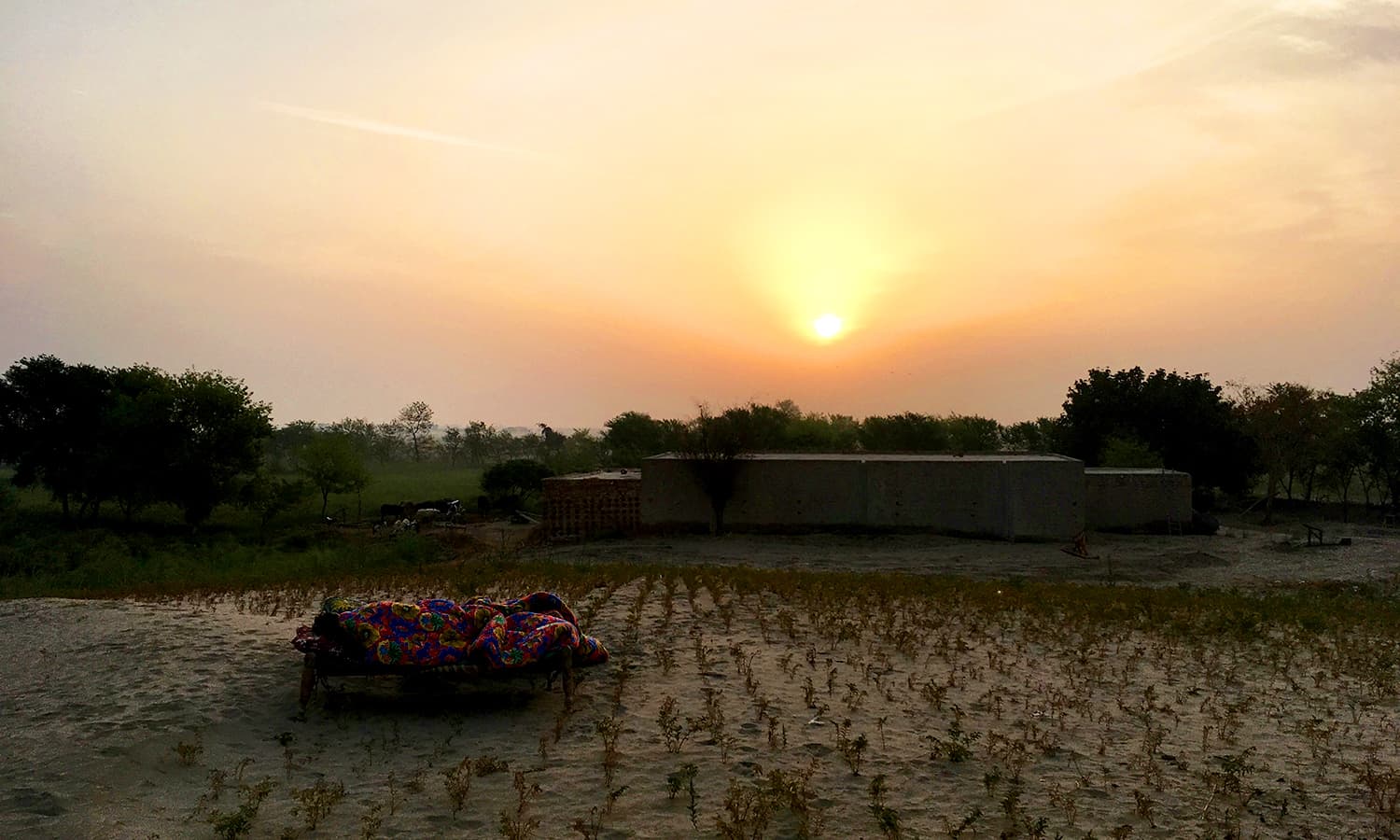 We arrived at the dera, and our charpoys had been dragged to the top of the nearest sand hill. Shaking the dust off our feet, we reclined on the beds and stared at the universe above.

This time, however, the desert wasn’t silent, but alive with the sound of a million beings which had come back to life, singing back to us the stories of the day which we had witnessed.

Later still, we slept, our thick blankets wrapping us away from the cold of the night, and as we dreamt beneath the heavens, the theatre of the desert unfolded around us.